The Best Bow Release For 2021: May The Force Be With You

Releasing the perfect arrow is not as simple as just letting go of a drawn bowstring. The act of allowing the potential energy to take over the work can affect how and where the arrow flies.

Using the correct bow release can provide numerous benefits to deploying the arrow, assist with technique and improve your overall archery enjoyment.

However, if you just want to dive straight into the top four, here they are at a glance:

But what are bow releases exactly?

What results can you expect from them? And what are the best bow releases available on the market today?

This article will answer all of these questions, together with a detailed review of each of the best releases.

What Are Bow Releases?

Bow releases, often called ‘release aids’ or simply ‘releases’, are devices which are used to draw and release the bowstring.

For many years, bows were released only with the fingers. Most often this was a ‘pinch’ method, utilized by the ancient Greeks, which used the thumb and index finger as the drawing mechanism.

Today, with the popularity of compound bows, the pinch method has all but disappeared, apart from those enthusiasts interested in historic archery techniques.

The tension and accuracy required for these bows need a more precise method of deployment, hence the release aid.

There are two main types of compound bow release, but both work on similar principles.

Depending on the mechanism, the bowstring, or a D-loop, is ‘locked’ or hooked into the bow release itself.

While attached, the bow is drawn by pulling back on the release with the arm or fingers. Pressing a trigger or button on the bow release ‘unlocks’ the bowstring and shoots the arrow.

How to Use a Bow Release As there are variants available, I’ll concentrate on the most commonly used – a wrist trigger-based caliper release for a compound bow.

There are different types of common bow release:

One of the most popular and easiest to use of all releases for a compound bow.

By attaching to the wrist, they allow the archer to pull back on the bowstring, using the whole arm for power, instead of just the fingers and hand.

Attached with either Velcro straps or a buckle around the wrist, they are secured to a rod which houses the index finger trigger to shoot and calipers to hold and release the bowstring. The T-handle is not usually attached to the arm. Instead, it is grasped in the hand, with a protrusion extending from beneath the index and middle fingers (giving it the T-shape) which attaches to the bowstring.

This means it requires greater finger strength than the wrist-strap style.

The arrow is released either through a thumb switch or back tension, both of which are described below. Again, like the wrist strap, it is used with a compound bow. Recurve or longbow shooters tend to use finger tabs or gloves as their release aid, mechanical releases are not permitted in competition.

In these circumstances, the index, middle and ring fingers are used to draw the string, with the tabs or gloves easing the strain and pressure on the fingers.

In addition, there are three types of mechanisms found in mechanical releases:

Why Do We Need Bow Release? Using a bow release provides numerous benefits, both for the hobbyist and competitive archer.

Using a wrist strap release allows the full power of the draw to be distributed down the arm. Not only does this make the draw easier, it can increase stability leading to a more accurate shot.

Releasing a bow without an arrow is known as ‘dry firing’.

As there is no arrow to use the energy, the entire power is distributed through the limbs and accompanying parts.

In a simple bow this is not too severe, but with the vast energy stored within a compound bow, it can seriously damage the equipment.

With the bowstring locked in place in a release aid, there is little chance of finger slippage releasing an empty bow.

Using a bow release can ensure that every arrow shot is the same as the previous one. Each release will be under exactly the same amount of potential energy and released in the same way as the last.

Using fingers, even for the most experienced archer, will lead to differences in draw. With only one point of contact on the bowstring (instead of three with fingers), bow releases are more consistent, and torque or finger rolling issues are reduced.

Anticipating the release of the shot can lead some archers to ‘jerk’ as they release the bowstring from their fingers. This can lead to inaccuracy. Mechanical releases relieve this tension. By gently squeezing a trigger or pushing a button, the exact release moment should come as a surprise.

If you shoot outdoors in winter, you know controlling a bowstring is tough with cold hands. However, even when wearing gloves, a button or trigger can be easily used without affecting the quality of the release.

What to Look for When Purchasing Bow Release

As we have seen, all bow releases are not the same. There are numerous factors to consider when selecting your ideal mechanism.

Bow releases are subject to large pressures during the drawing stage. Compromising on quality could result in short-lived release-life and could possibly damage the bow.

If you are using the release for hunting, the noise emitted by the bow release should be a consideration. Releases with a hinge mechanism have an audible ‘click’ and are considered the loudest. Wrist straps are made out of neoprene, leather, synthetics or a combination of the two.

As you will be wearing the release for a long time, choose one that will be comfortable for extended use.

For T-handles, take into consideration the size of the handle and your hands.

Ensuring a perfect fit is important. Generally, wrist releases with Velcro are more adjustable than straps, although for the hunter they can create too much noise.

Furthermore, in wrist releases, look for a rod with an adjustable housing length, to ensure it fits your hand perfectly.

If you are considering purchasing a bow release, you need a reliable source of information to discover which are currently the best available.

We have looked at the different models on the market, and have found what we consider to be the best bow releases for anyone wanting to deploy the perfect arrow. 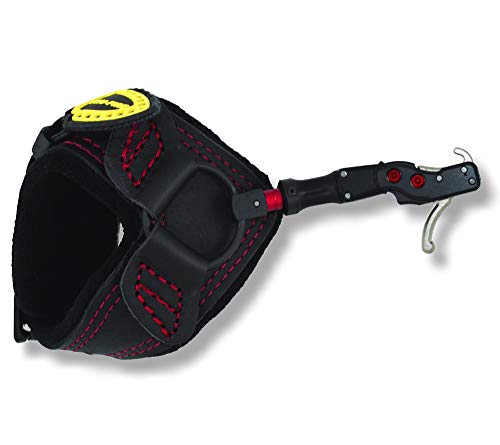 Generally accepted as the largest manufacturer of bowhunting releases in the world, TruFire have produced a versatile wrist release in the TruFire Hardcore Buckle Foldback.

Manufactured in the USA, as with all their products, the TruFire Hardcore offers comfort and versatility in a very reasonably priced release.

It comprises of an adjustable trigger pressure (from 3-oz. to 16-oz), which makes it suitable for people wanting either a soft release or needing the feeling of pressure – particularly useful when wearing gloves.

A simple single hook release (instead of jaws) makes it one of the quietest releases available, perfect for hunting.

Comfort has not been left out for the sake of practicality, as the wrist strap is substantially padded, with wide bands and turned edges to prevent ‘cutting-in’ to the skin.

Customers have praised its sturdy construction, with a buckle that will not fail under pressure or the demands of the outdoors.

Others have indicated that shooting daily over the past year with a 74 lb. draw has not affected the function of this release. 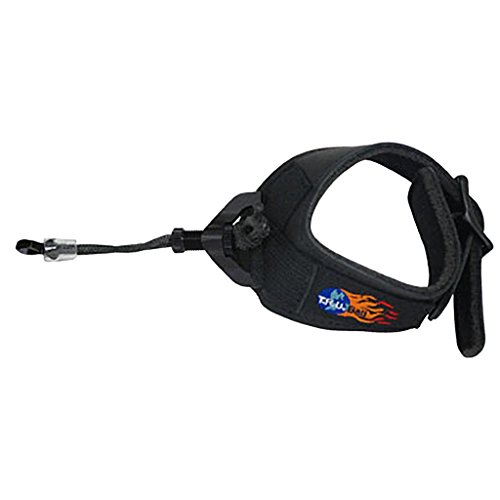 Although not a complete release mechanism, we have included the Tru Ball V-Lock as it adds an extra dimension to T-handle releases.

The Tru Ball V-Lock is a wrist strap designed to fit Tru Ball mechanisms, including the Boss X, Max Hunter 3, Fang 3 & 4 and the Max Pro 4.

It enables the traditional handheld T-handle release to be connected to the wrist. This reduces the need for stronger fingers as it allows the draw to be assisted by the whole arm.

This strap can also be used on non-Tru Ball T-handles, but they must have cut-outs in the T-bar for attachment.

It is worth checking with the manufacturer first. 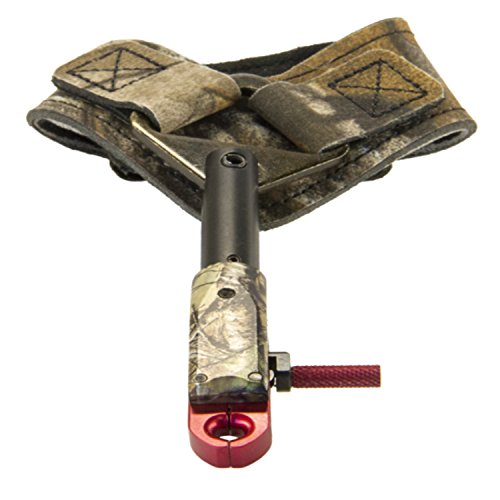 With over 35 years’ history in archery equipment, Scott are known for their consistently solid and reliable products.

The Scott Caliper has an outdoors appearance with a camouflage band, and the construction brings everything down to basics.

The release mechanism is via dual caliper jaws and operated by a simple straight textured trigger.

This may not be suitable for archers who like a traditional curved feel to the shooting mechanism, although it is versatile in that the release pressure can be adjusted.

Solidly made, it is a release built for the pressures that outdoor elements can bring. The wrist strap is a buckle, not Velcro, and made from padded nylon.

The rod is constructed from aluminum and steel with a 360-degree rotation.

Customers have indicated that it is very quiet, which further reinforces its hunting and outdoor credentials.

However, a few have mentioned that the rod cannot be adjusted for length, meaning archers with smaller hands may find reaching the trigger awkward. The Little Goose is a smaller version of the popular Scott Archery Mongoose, which makes it especially suitable for those who do not have large hands.

Not only is the overall construction reduced, the 4-way rod settings, combined with versatile strap adjustment, allow for perfect comfort and practicality for smaller hands.

The strap is made from nylon. Although it’s not as well-padded as others in this list, customers have still indicated that it remains pleasant to wear.

The release mechanism is a simple caliper (with only one jaw moving). Hence, in design, it is more like a hook release than a traditional caliper.

Reviews indicate that it is smooth, with an adjustable trigger, again flat and not curved. The 360-degree rotation means it is suitable for left and right handed shooters.

It isn’t the quietest of releases, with some users indicating a ‘spring’ sound can be heard upon deployment.

For this reason, it may not be the ideal product for the serious hunter.

Choosing the correct bow release can improve comfort, accuracy and power. This can increase the overall enjoyment of the sport.

Always consider what you require from a release, and then seek out a product that meets those demands.

All the releases reviewed above can enhance your archery pleasure and deliver improved results.

If you are looking for the all-round best release, we feel the TruFire Hardcore Buckle Foldback edges ahead.

For a versatile, long-lasting, comfortable and reliable release, it could be a sensible choice.