Hunting with a crossbow gets a bad rap from traditional and compound bow hunters. However, it is a great way for someone who wants to get out into the woods during bow season before the rifle opener.

It also allows individuals to hunt who may not have the time to practice with a compound bow or are unable to draw back a compound or recurve crossbow. Whether you like it or not, hunting, or archery practice with a crossbow is still bow hunting and it’s a great way to get into the sport.

With that said, we’re going to cover the five bows above.

But first, let’s talk a little bit more in depth of what a crossbow is and how you can use it effectively.

What Is A Crossbow A crossbow is similar to a bow. It has an assembly called a prod that is mounted horizontally on the frame. It is also handheld and resembles the stock of a gun. The projectiles that it shoots are very similar to arrows, but are called bolts.

These were popular weapons during medieval times, and have evolved since then to become popular for hunting big game such as deer hunting. Crossbows can also be used for recreational shooting, or even fishing.

Benefits of a Crossbow

One of the biggest draws to hunting with a crossbow is that when the bow is cocked there is no effort exerted from the shooter. Which makes it perfect for young kids or disabled hunters who may not be able to draw back a 60 pound compound bow. This will allow the hunter to solely focus on aiming the bow in the correct spot and exercising proper trigger control.

The bow is also held and aimed like a gun, which makes it easy for the transition from rifle hunting to bowhunting. Same with a gun you should not be dry firing it. So look for one that has an anti dry fire device on it, or other safety features.

Crossbows also have much heavier draw weights than their compound counterparts. Most compounds are in the 50-80 pound range while crossbows can reach up to 200 pounds. Because of this, the crossbow is able to shoot their broadhead bolts much faster than the compound.

Despite the faster feet per second, the accuracy distance is pretty much the same as compound bow, With bow having an effective range of 40-50 yards.

How to use a Crossbow There are a couple of steps you’ll need to learn before you become an entry level crossbow shooter. Below we’re going to cover those steps in detail.

The first thing you’ll need to do is

1. Cock the bow. There are two different ways of doing this

If you wish to cock the bow manually then your foot in the stirrup of the bow, and pull the string back evenly across both sides of the barrel. You’ll hear a clicking noise indicating that it is cocked.

A crank is much easier to use but it is going to take much longer than doing so manually. A crank is basically a winch, and you’ll find that some come with the bow or as separate devices. To crank a crossbow you must first engage the crank and turn it until the string is fully cocked. Again, it’s much easier than a manual but can be time consuming if you need it done quickly.

Once you have cocked the bow you’ll need to load in a bolt. Place the bolt in the barrel of the bow. Next, align the vane of the arrow in the barrel channel. Finally, you must lock the bolt securely into place against the string. Loading the bow properly ensures arrow precision. Most crossbows use a sight similar to one on a rifle or shotgun. You will be looking through this while shooting and it will help improve your aim.

Before taking it out to the woods to hunt you must first sight in your red dot sight to make sure it is accurate. Start off by shooting at a target that is close and adjust your scope based off of how far away the bolt landed from the center of the target. From there you should be able to move further out until your shooting accurately from 40 yards.

Once you have your bow sighted in it is time to go out and shoot. Remember to lightly squeeze the trigger when firing, as a hard trigger pull can maker for an inaccurate shot.

Considerations before buying a Crossbow Now that we’ve gone over what a crossbow and how to use one, let’s dig a little deeper and take a look at what you should be looking for when buying a bow. Before reading keep in mind that if you’re new to shooting a crossbow then look at something that has a crossbow package which will include everything you need.

Also, it would be best to purchase some wax or lube for your string. This makes the string more durable and will last you many hunting seasons.

If you plan on purchasing an older model then it would be recommended that, if possible, you give it a few test shots. This lets you know how the bow shoots and if it’s worth the purchase.

If you it;s more comfortable with you then a fore-grip would be great to improve accuracy for shooting. modern crossbows are going to be leaps and bounds faster than compound bows. They generate kinetic energy that you should be able to take down just about any large game animal. Most modern bows come in between 350 and 450 feet per second.

Take into account the power stroke as well. This is length between the crossbows string in the cocked position, and its uncocked point. It equates to the draw length of a vertical bow,

A crossbow is capable of shooting up 60 yards accurately, however it is not recommended. Most shooters should not be going past 40 yards unless they are experienced or professional shooters. There are many factors that come into play when shooting an arrow or a bolt and it takes practice to ensure a long shot will be true. Durability is something every hunter or outdoorsman should consider before purchasing a product. The good news is that crossbows are generally very tough pieces of equipment and are made of high-quality materials. Especially the newer models. Most can survive a drop without you having to do much more than re align the sight.

Older models that are not as high end could be troublesome and you may need to be more careful with those and keep them in better shape. So ensure you find something made of good quality materials.

When picking out your size it’s best to do so in person. That way you can get a feel for how it feels in your hands and you can make sure it’s comfortable. If you plan on hunting with your bow then you should look for the smallest one possible so that you have maneuverability with your bow around when stalking, or sitting in a ground blind. Something with a nice compact size will be perfect for this as well.

If you need something with a compact design, then check out a reverse draw crossbow. These compact crossbows are a very powerful crossbow and arguably the best hunting crossbows you can find. Some of them are the lightest on the market, and could be the best crossbow for the money. These are going to weigh heavier than your typical compound bow. Most will actually weigh just as much as your rifle. Because of this it is best to use a mount or some type of shooting sticks when aiming your bow. The extra stabilization will allow you to shoot more accurately. If this is an issue then look for some of the more lightweight crossbows on the market. Try holding them in the store and see how they feel. If they have a rope sled, or an auto safety device then that is a bonus.

There is a difference in noise level with compound and crossbows. The compound bow is generally going to be quieter because it shoots at a slower rate. The crossbow however will make more noise, but due to the high feet per second it is shooting, you’ll find that deer don’t have enough time to duck a shot the same way they would do with a compound.

Crossbows are all going to be easier to use than a compound. The only difficult part is going to be cocking system on the weapon. A crank is going to be time consuming but allows for young hunters to easily put a bolt into the bow. The manual cocking aid is much quicker and can allow for some of the fastest crossbow shots.

Now that we’ve gone over exactly what a crossbow is as well as the minute details, it’s time to talk about some products that you can use for your next trip into the woods. If you plan on taking it hunting then it may be best to use one that has a mossy oak or realtree camo pattern. 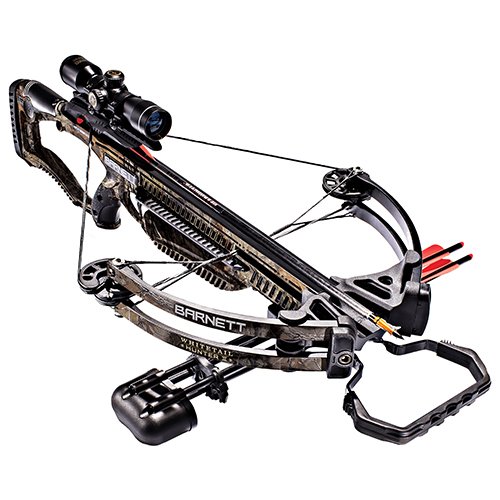 Equipped with a coking assist, this bow is perfect for young hunters who can’t pull back 150 pound limbs. It also has a very slim design design which makes it perfect for moving around in either your tree stand or ground blind.

It also comes equipped with an already mounted and sighted in reticle scope. With just a few practice shots and tweaks of the scope you should be shooting one inch groups and ready to hit the woods.

The bow also shoots at 350 feet per second. Which should be enough to take down whatever wild game you’re hunting for. 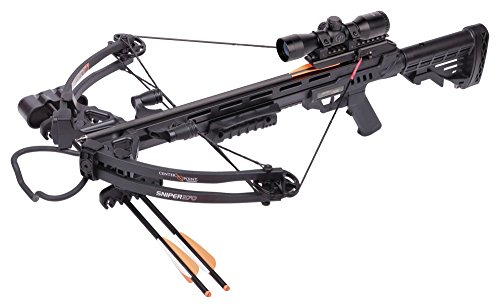 A fully adjustable stock means this bow can fit just about anyone. It’s perfect for the younger hunter who may need a bow that they can grow with. Or it could be used by multiple people, including friends and family.

Along with being fully adjustable it also comes with a five year warranty, three bolts, arrow quiver, scope, as well as a cocoker to help you draw back.

Overall, this crossbow is solid for the money but don’t expect much longevity out of it if you plan on shooting with it a lot. It tends to break down if used heavily. A great, accurate out of the box crossbow. The Wicked Ridge is on the higher end price point, but equipped with a patented reverse-draw technology that shifts the riser from front of the crossbow to the center to give it better balance and eliminate the “nose-heavy” feel of traditional crossbows.

This crossbow shoots up to 400 FPS, delivering lightning fast speeds and plenty of accuracy towards your target. Making a great option for beginners with its easy to use features or experienced hunters looking for out of the box set up.

A crossbow doesn’t have to only be used by young archers, or physically impaired hunters. It’s a serious weapon that takes skill to use and can be a great way for someone to get out into the woods early and get a head start on all the rifle hunters.

Hopefully the crossbow reviews and explanations have helped you understand what crossbows are and how effective they can be. Take some of the products above and give a closer look to see if they would be right for you. If not, feel free to use them as a guide to purchase whatever bow you need. Amazon, or any outdoor store will be able to help you find what you need.